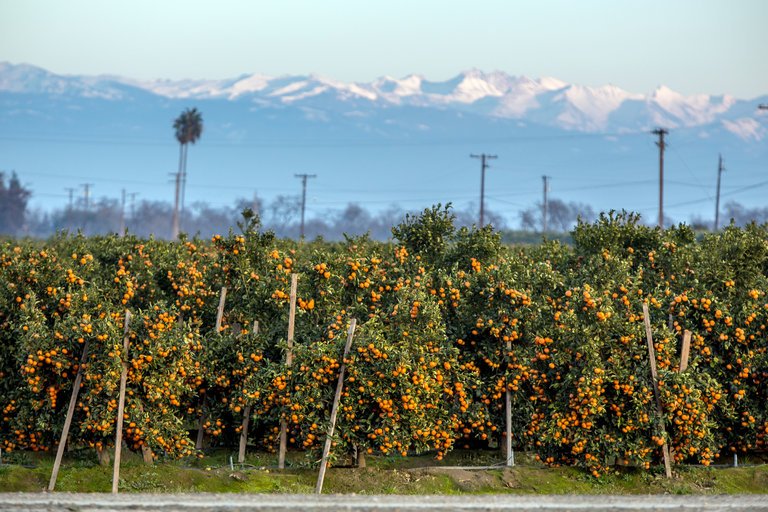 BAKERSFIELD, Calif. — Along the Maricopa Highway at the southwestern end of the San Joaquin Valley, rimmed by hardscrabble hills and bobbing oil pumps, stretch miles of lush green groves bearing fluorescent mandarin oranges. Once home to cotton fields, this is now the epicenter of an epic agricultural boom that has industrialized a noble fruit and turned it into a rising star.

Since that expansion started in the late 1990s, California’s mandarin plantings have increased 10-fold, to 50,000 acres from 5,000. The state now harvests 92 percent of the nation’s mandarin crop, while Florida, troubled by citrus greening disease and obsolete varieties with seeds, has had its share drop to 8 percent, from 66 percent.

In the process, thanks to new offerings and deft marketing, mandarins — popularly known as tangerines — have become a fixture in the American fruit bowl. The country’s consumption of mandarins has doubled, to five pounds a year for every American, while orange sales have declined.

Mandarins may seem an unlikely candidate for a marquee fruit. The most complex and flavorful of citrus, they are correspondingly difficult to grow, as demanding as wine grapes in their requirements for terroir and horticultural prowess. At their finest, they are juicy, sweet-tart and intensely aromatic, but many store-bought specimens are dry and bland. Shippers and merchants often store them far past their peak, and the seeds in traditional varieties can put off consumers.

Native to China and northeastern India, mandarins are one of five original types of citrus (along with pummelos, citrons, kumquats and papedas) from which all others, like oranges and grapefruit, are derived. Until recently, because most mandarins were relatively small, delicate or full of seeds, they remained less cultivated than other citrus in the United States.

Several forces converged to ignite the California mandarin boom. Consumers increasingly demanded convenient, easy-to-eat fruits like blueberries and seedless grapes. In the 1970s, Spain started exporting clementines — seedless and easy to peel, with excellent flavor — to the Eastern United States, and that trade increased significantly after a devastating California citrus freeze in 1990.

Two varieties of seedless, easy-peeling mandarins, adapted to mechanized packing, became available to California growers, and horticulturists figured out how to grow seedless clementines, a type of mandarin, in the harsh climate of the San Joaquin Valley.

In the late 1990s, two companies with deep pockets and marketing savvy, Sun Pacific and Paramount Citrus (now Wonderful Citrus), gambled big with huge mandarin plantings on the Maricopa Highway, 25 miles southwest of Bakersfield, where they were isolated from other citrus whose pollen could make the fruit seedy.

“It was a crapshoot,” recalled Berne Evans, the plain-spoken owner of Sun Pacific, during an interview in his office in Pasadena.

The bet paid off spectacularly. Mandarins from the two companies, sold as Cuties and Halos, now dominate the American market; these and a few other brands of reasonably priced, seedless and easy-peeling fruit have become a staple.

As often happens, however, industrialization has exacted compromises. There are two main types of mandarin in Cuties and Halos boxes, and the earlier of these to ripen — yellow-orange clementines marketed from November to mid-January — requires a more Mediterranean climate to produce the juiciest, most flavorful fruit. The chief clementine variety grown in California, Clemenules, is larger but less sublime than the original varieties, Algerian and Fina.

To a greater extent than for other citrus, commercial packing can distort the flavor of many mandarins, including clementines. The washing needed for food safety strips the natural wax off fruits, and to keep them from drying out, packers apply artificial wax. This stops natural respiration, leading to the production of fermented and musty flavors, which are aggravated by prolonged storage and unrefrigerated conditions. The only recourse for shoppers is to taste or at least sniff a sample before buying.

Fortunately for consumers, the other main type of mandarins in Halos and Cuties boxes, from late January through April, is better adapted to the San Joaquin Valley climate and less susceptible to post-harvest degradation. These are actually two similar varieties: W. Murcott Afourer, a seedling of Murcott (best known as the Florida Honey tangerine), found in Morocco in 1982, and Tango, bred from W. Murcott Afourer to be seedless even when pollinated.

Attractively deep orange inside and out, dependably juicy, easy to grow and wildly prolific, these robust prodigies rule the market in their season.The supremacy of the two big companies and two mandarin types has forced medium and smaller growers to think outside the Cuties and Halos box — to exploit seasonal and regional niches, and to market distinctive premium varieties.

Many of these growers are in the traditional citrus belt in the eastern San Joaquin Valley, from Bakersfield to Fresno, where the red soil imparts robust flavor. Some have focused on offerings that ripen in late December and January, when the main commercial varieties are not at their best.

The fine acid balance and rich aromatics of one variety, Page, have made it a longtime favorite at California farmers’ markets, but until recently, large growers neglected it because it doesn’t peel very readily, and looks more like a small, round orange than a mandarin. Since it fills the December-to-January gap, and produces and ships well, it has been planted on more than 1,000 acres in the last five years and become widely available for the first time.

One of the best-tasting mandarins in the world, Daisy SL, has a gorgeously smooth, red-orange rind, firm, intensely sweet-tart flesh that melts in the mouth, and complex, lingering aromatics. Alas, plantings have been limited because it is only moderately easy to peel, low in seeds rather than seedless, and genetically unstable, so that some trees have reverted to seedy form. In today’s market, fruit with seeds have little value.

The prized Dekopon mandarin of Japan, grown and marketed in this country as Sumo from mid-January to March, has cornered the high-price niche since its introduction in 2011. Huge, with pebbly skin and a distinctive bump at the top, very easy to peel and seedless, it is intensely sweet but balanced by refreshing acidity, a blend of power and finesse.

Despite its rugged appearance, it takes extreme care to grow and pick, so it costs $4 to $7 a pound, as much as a whole box of common mandarins. To ensure that the quality matches the price, the packer recently installed near-infrared spectroscopy sensors that measure sweetness and acidity. Many stores sell Sumos, including Whole Foods nationwide, Wegmans in the Middle Atlantic States, Central Market in Texas, and Town & Country in Washington State.

A new type of hybrid mandarin with red flesh like a blood orange, marketed as Ruby Tango, is large and mostly orange on the outside, peels fairly easily, and is sweet, juicy and seedless. A cross of blood orange and clementine bred in Sicily, grown primarily by Sunwest Fruit, it will be sold on a significant scale for the first time this year starting around Valentine’s Day by retailers like Fairway Market and FreshDirect in the New York area and some Whole Foods stores in California.

The cutest, most child-friendly mandarin is the Seedless Kishu, an ancient Japanese specialty the size of a golf ball, very easy to peel, super sweet, with welcome acidity. It is so small, expensive to pick and perishable that it seems utterly uncommercial, but two sophisticated specialty growers in Orange Cove have planted 20 acres, some on trellises like wine grapes. There, its season is December, but the crop from the original California

growers, Churchill Orchard of Ojai, starts ripening in mid-January and will be available at select stores nationwide (including the Orchard in Midwood, Brooklyn) for about the next 10 days.

Ojai, 40 miles south at the other end of the Maricopa Highway from the big commercial plantings, across a rugged mountain range in a coastal valley, is the domain of small artisanal growers. The area’s fierce summer heat sweetens the fruit, and a wide daily fluctuation in temperature preserves acidity and develops aromatics. But even within this Napa Valley of mandarins, there is considerable variation.

“The presence or absence of acidity in the same variety, sometimes grown a block apart, is one of the great mysteries of mandarins,” said Lisa Brenneis, an owner of Churchill Orchard. “Sweet is one thing, but if you don’t have the acidity with it, it doesn’t haunt you.”

Ojai growers specialize in Pixie, a late-season, naturally low-acid, seedless and easy-to-peel fruit that reaches an ideal balance only there. Because the variety is highly susceptible to developing off-flavors from waxing, Ojai Pixies are dry-brushed clean rather than waxed. They are available from March to May at many stores around the country.

Tony Thacher of Friend’s Ranches, whose family has grown mandarins in Ojai since the 1920s, ships unwaxed fruit by mail order, including supreme specimens of Daisy SL, in season now. Some of the six varieties, packed by his daughter, Emily Ayala, have seeds, and they are not cheap — about $60 to $75 for 10 pounds, including shipping. But they offer a rare opportunity to taste the most flavorful mandarins from a prime growing area, as fresh as possible.

The commercial mandarin season closes with Gold Nugget, a half brother of Pixie harvested from February to April or May. It is seedless and has excellent sweet flavor, with good acidity, but the rind is rough, with abundant oil that makes it difficult to pick and pack, and comes off on the hands when peeled. Many growers are planting it anyway, believing that its season and flavor outweigh these drawbacks.

As for the future, the mandarin boom may be peaking. Most major growers feel that the market is getting saturated, and that California plantings will soon stabilize. But whatever happens, mandarins have arrived, and now is the time to try them.

United Farmers Group is a division of Machuca International Inc. For the past 35 years Alex Machuca has built a business that has expanded to include a vast array of exotic and tropical fruits and vegetables from a myriad of countries around the world. An original 400 boxes of imported plantains back in 1976 grew to 25,000 boxes a week, and is now only one of the many products of … END_OF_DOCUMENT_TOKEN_TO_BE_REPLACED