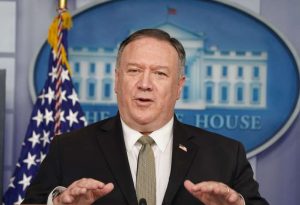 WASHINGTON — The White House’s Office of Management and Budget is working on a possible plan to cut U.S. aid to the World Health Organization, administration officials said Wednesday, as President Donald Trump tries to deflect blame for his handling of the coronavirus pandemic.
Administration officials said they also plan to look into the timeline of the WHO’s reaction to the coronavirus after it first appeared in China, as well as “links” to China.
“What the WHO knew and how it reacted to that knowledge is relevant to the U.S. government’s response to the crisis,” a senior administration official said.

News to stay informed. Advice to stay safe.
Click here for complete coronavirus coverage from Microsoft News
Trump’s focus on the WHO comes as he continues to face questions about his early statements playing down the virus and how unprepared his administration has been. The president’s embrace of a broadside against the WHO echoes similar criticism from hosts on Fox News Channel, including Tucker Carlson, and some Republican lawmakers.
Trump said Tuesday that he was putting U.S. aid to the WHO “on hold.”
“We’re going to put a very powerful hold on it,” he said, although he said later that his administration would review it.
He also accused the WHO of being “China-centric” and slow to sound alarms about the coronavirus.
“They could have called it months earlier,” the president said.
The director of the WHO, Tedros Adhanom Ghebreyesus, responded Wednesday by essentially accusing Trump of politicizing the virus.
“The focus of all political parties should be to save their people. Please don’t politicize this virus,” Ghebreyesus said. “If you don’t want many more body bags, then you refrain from politicizing it.”
But the president doesn’t appear poised to back down.

On Wednesday, he said again that the WHO “got it wrong.”
Secretary of State Mike Pompeo, who appeared alongside Trump at the daily coronavirus briefing at the White House, said the administration was reevaluating its funding for the WHO, but he said it isn’t the time for a change of leadership at the organization as it fights a pandemic, as some Republicans have advocated.
Asked about the notion that a period of global pandemic isn’t the most opportune time to cut funding, a second senior administration official shot back: “Now is not the time to be misleading the world about how China covered up the pandemic.”
Dr. Amesh Adalja of the Johns Hopkins Center for Health Security said the U.S. should be supporting the WHO.
“This is our premier public health agency in the world, and it is important that it be supported,” Adalja said Wednesday on MSNBC’s “Andrea Mitchell Reports.”
The U.S. is the largest funder of the WHO, contributing $14.7 million for the international group’s coronavirus fund. But Trump recently proposed cutting the U.S. contribution. So the president’s attacks in some ways advance two of his goals: They could cut back on international aid and minimize blame for his administration’s handling of the pandemic.
“There is a lot in the WHO that does not jibe with the president’s agenda,” a senior administration official said.

Cutting U.S. financial support for the WHO would also remove a key talking point for American diplomats promoting the image of U.S. leadership during the pandemic.
China, working to rehabilitate its image as the country of origin of the coronavirus, has tried to usurp the title of global humanitarian savior by providing medical equipment, protective gear and even medical professionals to several countries in Europe, Africa and the Middle East. The U.S., still in the middle of its own fight against the outbreak, is keeping all critical medical supplies at home until demand is met, and it is instead pointing to its financial assistance.
“We’ve long maintained an unsurpassed commitment to global health and humanitarian assistance,” Pompeo told reporters at the end of last month. “The United States remains by far the largest contributor to the World Health Organization, as we’ve been since 1948. Our contribution exceeded $400 million last year, 10 times that of China.”
Still, earlier this year — just as the extent of the coronavirus outbreak was starting to be understood — the Trump administration proposed a budget that would slash funding to the WHO by more than half what it had been the previous year.

United Farmers Group is a division of Machuca International Inc. With Alex's 40 years experience the Machuca Family has recently built a business that has expanded to include a vast array of exotic fruits, citrus, tropicals, tropical fruits and vegetables from a myriad of countries around the world. MACHUCA INTERNATIONAL INC. Let us be your eyes …. And help eliminate mistakes that … END_OF_DOCUMENT_TOKEN_TO_BE_REPLACED

United Farmers Group is a division of Machuca International Inc., a company owned by the Machuca family. For the past 35 years Alex Machuca has built a business that has expanded to include a vast array of Citrus exotic tropical fruits and vegetables from a myriad of countries around the world. Read More